People all over the county enthuse about their hometown, but Hastings people really love it - and with its combination of a thriving arts scene, cultural heritage and great pubs and restaurants, who can blame them? Words: Andrew Hasson

1) Dominating the skyline of St Leonards-on-Sea since 1938 is the Art co classic Marine Court, designed to resemble the Queen Mary, then the world’s most famous and elegant ocean liner. It was, at that time, the tallest block of flats in the country.

There is only one other building in the world based on the design of a specific ship - it’s a building in Puerto Rico, based on one of Queen Mary’s contemporaries, the SS Normandie. Coincidentally, they were both completed in the same year.

In the 1960s, there was a club in the building called The Witch Doctor, which played host to Jimi Hendrix, David Bowie and The Who among others. 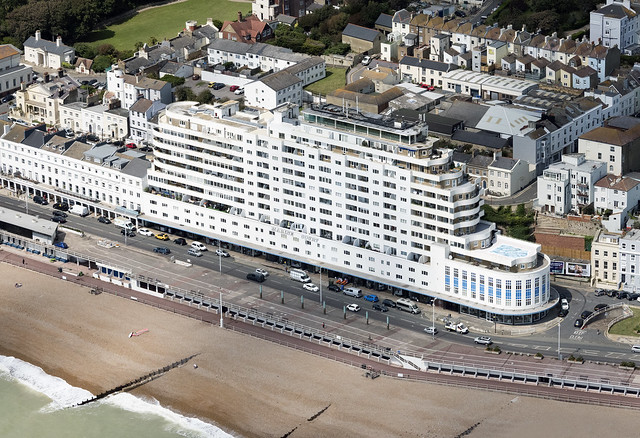 2) Regency terracing on the seafront of St Leonards, just to the west of the pier, is absolutely typical of the time. 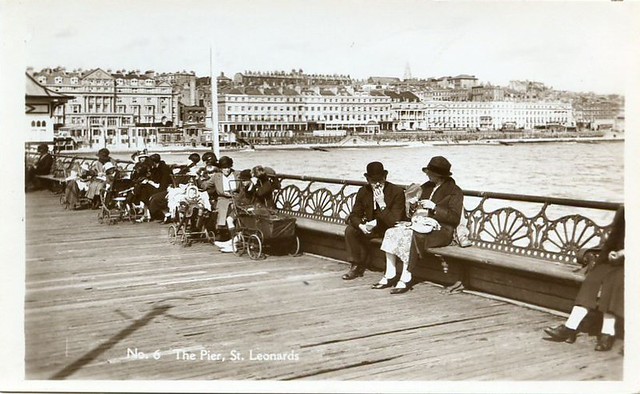 3) The Royal Victoria Hotel has exuded elegance and charm since 1828 and doesn’t appear to have lost any of its imposing beauty. Queen Victoria stayed here, as did her son, King Edward VII, and his son, King George V.

Prime ministers have been guests here and other celebrities of their time, like Alfred Lord Tennyson. Back then, a poet could be a big star. 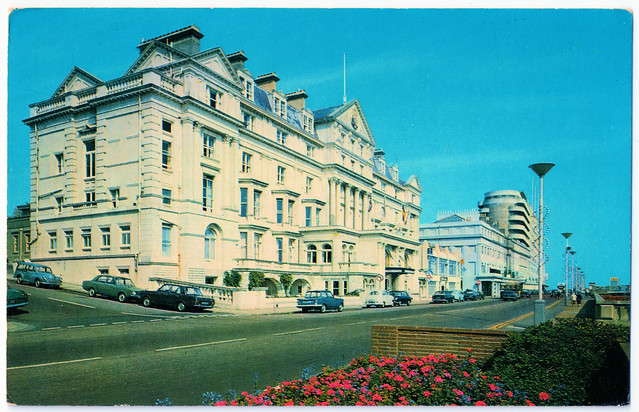 4) Hastings Pier has undergone so many changes since it opened in 1872, it really deserves a feature all on its own. A lot of locals will remember the dreadful fire of 2010, but the first major fire was way back in 1917, when the 2,000-seater pavilion was destroyed.

It could be argued that the pier’s heyday, like most piers of the time, was in the 1930s. But during the ’60s, this was a really well-known venue for every major pop group of the time - The Kinks, Cilla Black, T. Rex, The Rolling Stones and Tom Jones.

It was on Hastings Pier where Syd Barrett played his last show with Pink Floyd. In the ’70s, every punk band of note played here - Sex Pistols, The Clash and many others.

5) The entrance to the Edwardian classic Palace Court, once an hotel, is now looking a little past its best, but I do love this stylish and powerful front door.

Film fans should check out Neil Jordan’s 2012 movie Byzantium which features this building heavily, inside and out. 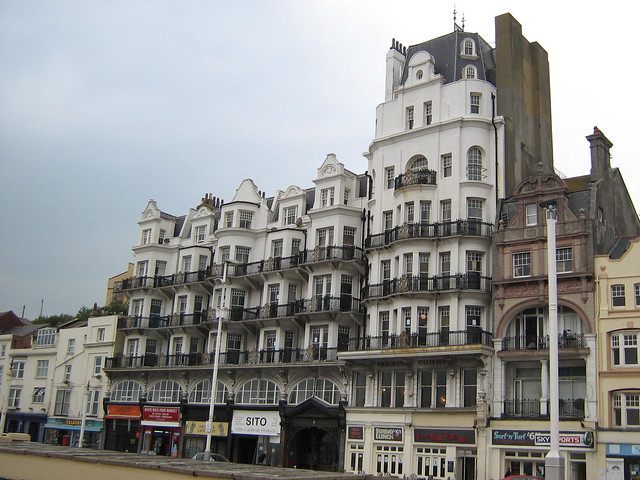 6) In the early 19th century, the small area of land around Robertson Street lay outside the town’s borders and became occupied by itinerant workers helping to build St Leonards.

It became a sort of shanty town - relatively lawless and free-spirited. When bailiffs were sent in to make arrests at one point, the occupants rioted and raised the stars and stripes, a symbol back then of freedom, and declared their independence from the crown.

They called it The America Ground. It didn’t last long. 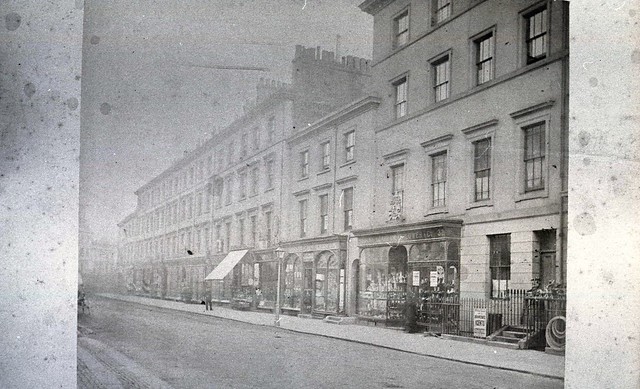 7) Hastings is home to the UK’s largest beach-launched fishing fleet - between 20 and 30 vessels that call The Stade their home.

The Stade is that shingle beach where one can see the fleet when they are home and not at sea. When they come home, each boat has to be hauled up the beach by a machine and winch mechanism, operated by men called the ‘boys-ashore’.

8) Unique to Hastings, the net shops were where the fishing fleet housed all their nets and ropes.

They were weatherproof to prevent the fishermen’s gear rotting during wet weather. ’Shops’ in this context doesn’t refer to the sale of goods, but rather it’s an abbreviation of the word ‘workshops’. 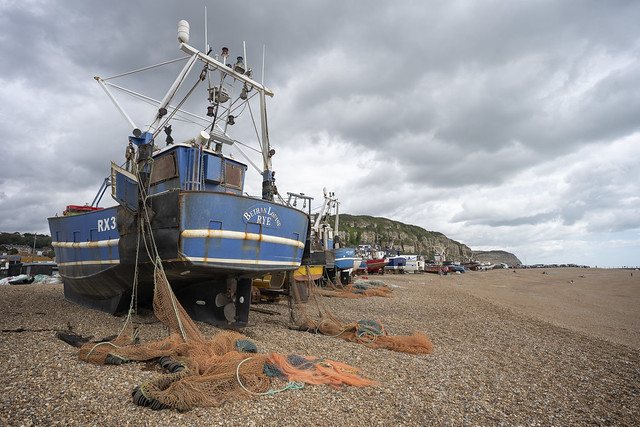 9) Looking down across the town is the ruins of Hastings Castle, the first castle built in England by William the Conqueror. 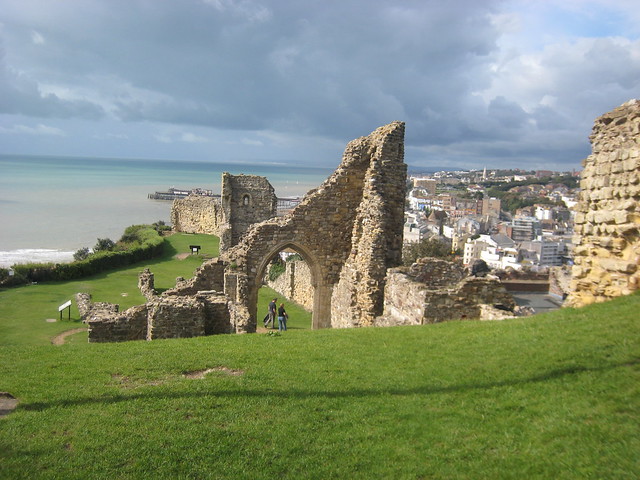 10) In 2013, the Holy Trinity Church in Robertson Street received a surprise in the post - a large, heavy parcel containing a Bible that had been stolen 42 years earlier, in 1971.

Inside was an anonymous letter containing a confession - a young German student, on an exchange trip, had taken the enormous book in a moment of youthful spontaneity.

Over the years, guilt had eventually led to the book’s return and a plea for forgiveness. 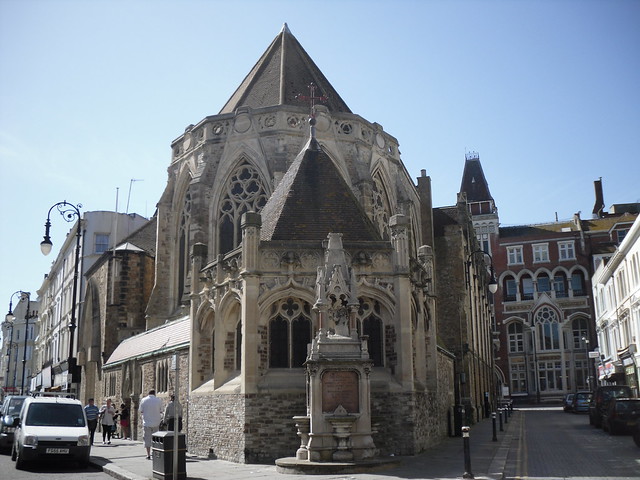 11) The Spirit of Cricket is a statue standing in the Priory Meadow shopping centre. Designed by Allan Sly, it was unveiled by Her Majesty The Queen in 1997 when the centre first opened.

The shopping centre had been built over the Central Recreation Ground, a first-class cricket ground that stood from 1864 to 1996.

Sussex County Cricket Club played here regularly and, over the years, many famous cricketers appeared here, W.G. Grace and Don Bradman among them. 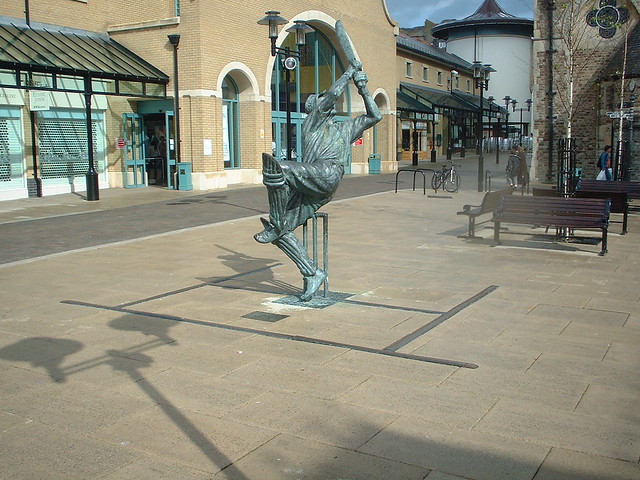 12) There seems to be a buzz about George Street, regardless of the time. Well-known for its bookshops and antique markets, it also has a selection of cool pubs and bars, old buildings and twittens to explore. Originally, this street was called ‘the suburbs’. 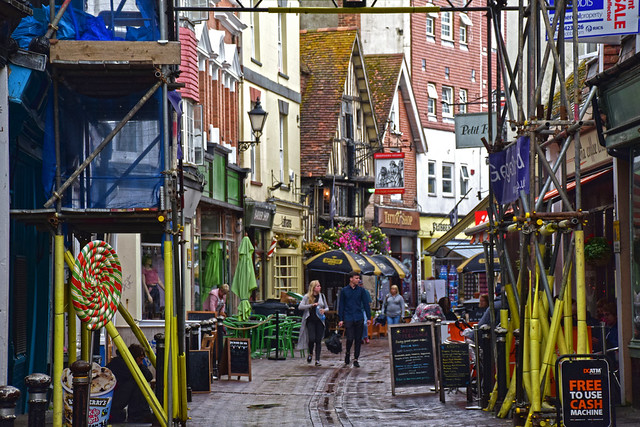 13) Outside the Town Hall, near one of the entrances to the Priory Meadow shopping centre, stands a rather weatherbeaten statue of Prince Albert, the husband of Queen Victoria.

He once took pride of place on the Albert Memorial, just around the corner, which stood from 1862 until 1973 when the structure itself became dangerous and was demolished.

The poor chap was bought by a local lady and spent years in a garage before being brought back into town three years ago. 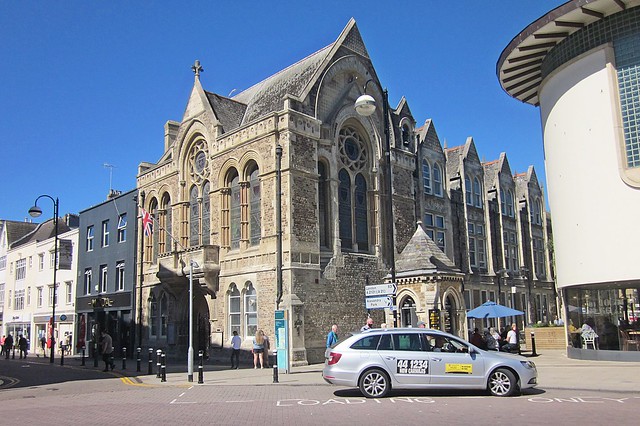 14) Queen’s Avenue arcade is a late-19th century classic, when this sort of shopping experience was all the rage.

But this one has a claim to fame no other arcade can offer. It was here in 1924 that John Logie Baird first publicly demonstrated his new invention, which he called ‘television’. 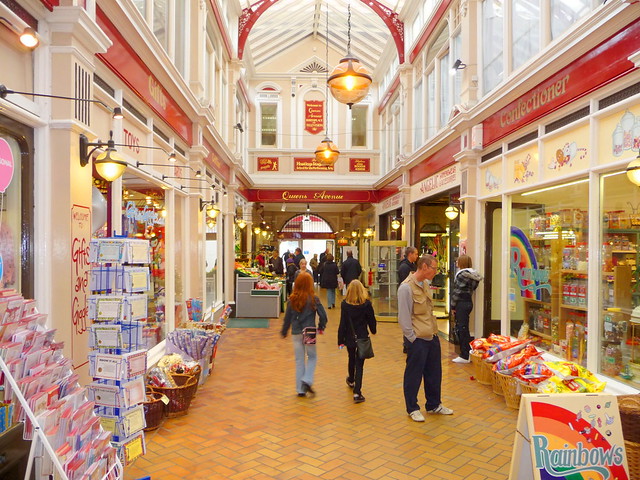 15) The southern end of the High Street is an eclectic mix of art and bric-a-brac and fashion and food. And pubs, of course. The northern end is a bit more residential, but incredibly picturesque – a jumble of architectural styles with steps up to a raised pavement with railings. 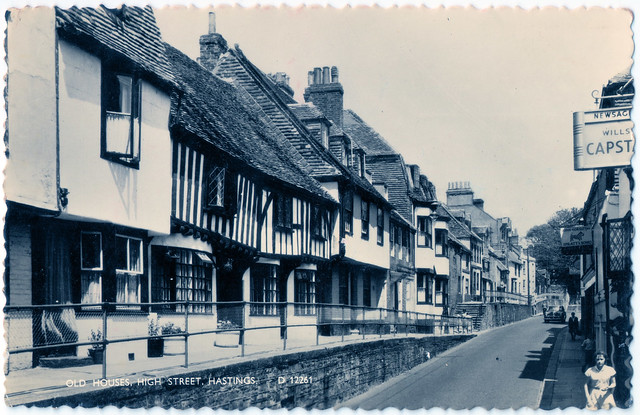 16) The Cinque Ports Arms in All Saints Street has an unsubstantiated claim to be the oldest pub in Hastings.

It takes its name from the original Cinque Ports Federation, a grouping of five (cinq in French) ports that provided men and ships to the government should they be needed militarily. The other ports were Hythe, Romney, Dover and Sandwich. 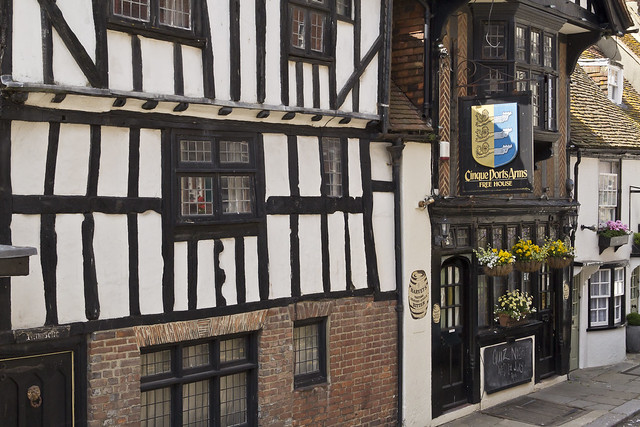 17) All Saints Street is a part of the medieval Old Town, with some of the oldest-surviving original buildings in town. It is the essence of Old Town and must be one of the most photographed streets in Hastings. 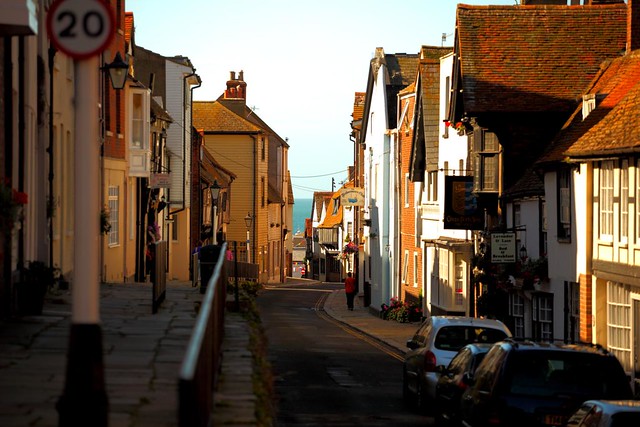 18) The East Hill Lift is the UK’s steepest funicular railway. From Rock-A-Nore you can travel up to Hastings Country Park and see views all over town, back towards St Leonards and down to The Stade. It was opened to the public in 1902. 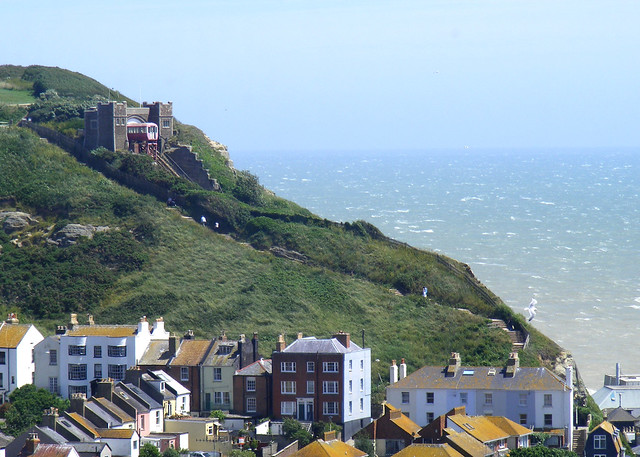 19) History and culture sometimes don’t mean much to children on holiday. What counts are the seafront amusements on offer and Hastings does not disappoint its young visitors. It’s all here - colour, noise, slot-machines and chips. 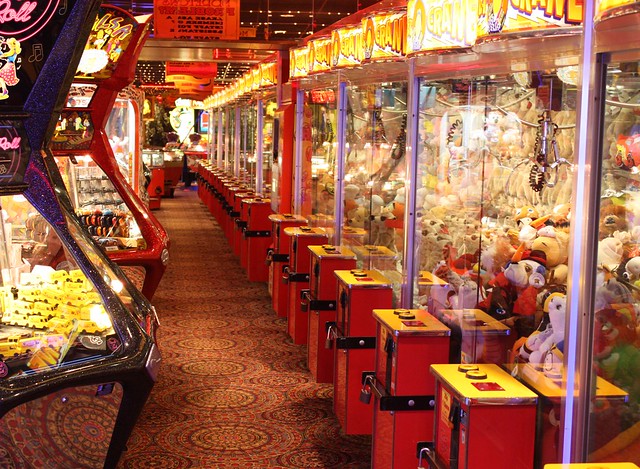 20) In 1862, Alexandra Park was opened by the Prince and Princess of Wales, who was commonly known as Alexandra. It remains one of the town’s greatest assets, spreading north from almost the town centre for over two miles, deep into residential areas. 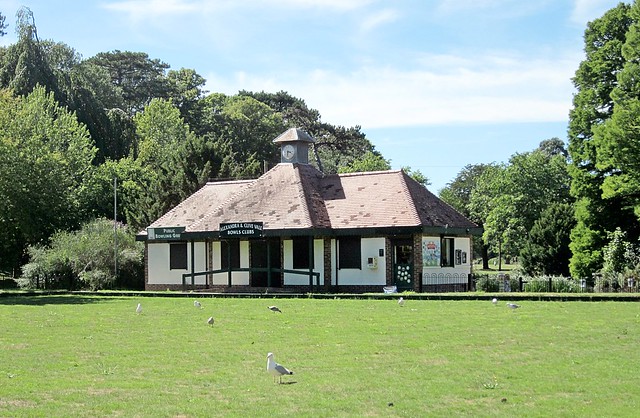 21) The Deluxe bingo hall on the seafront started life as a theatre - an enormous, elaborately decorated theatre. 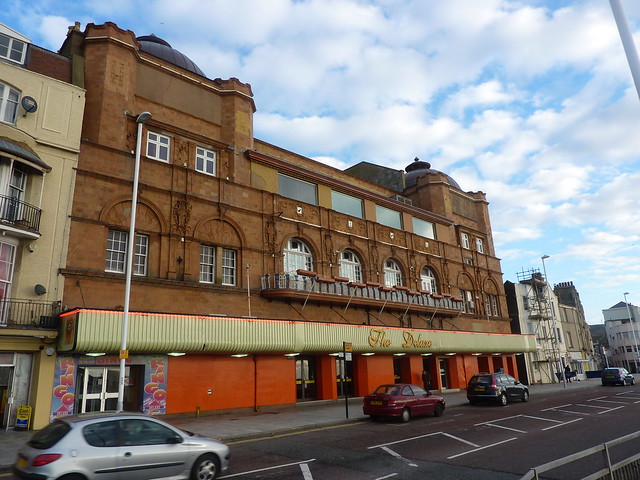 22) The centrepiece of Pelham Crescent on the seafront is the Church of St Mary In The Castle. The whole crescent could do with a bit of sprucing up, but the buildings are gorgeous and St Mary In the Castle is stunning inside.

A fantastic centre for the arts and music, there has been a proper revival since the dark days of the 1980s when the building was in real trouble and close to being put on a dangerous buildings register, before a group of locals campaigned to save it. 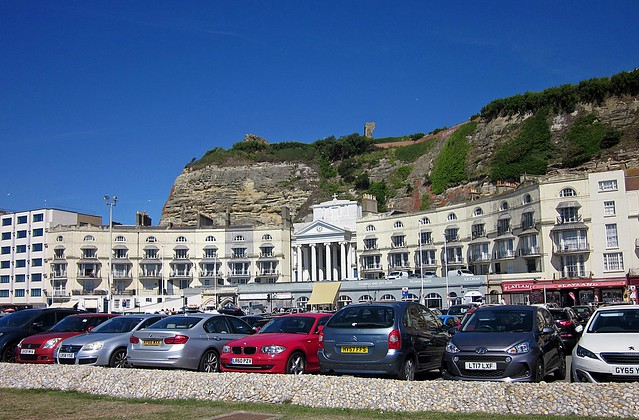 23) Twittens can lead to surprises in this town. Just off the High Street, through a small, door-sized gap in the wall, is Sinnock Square. 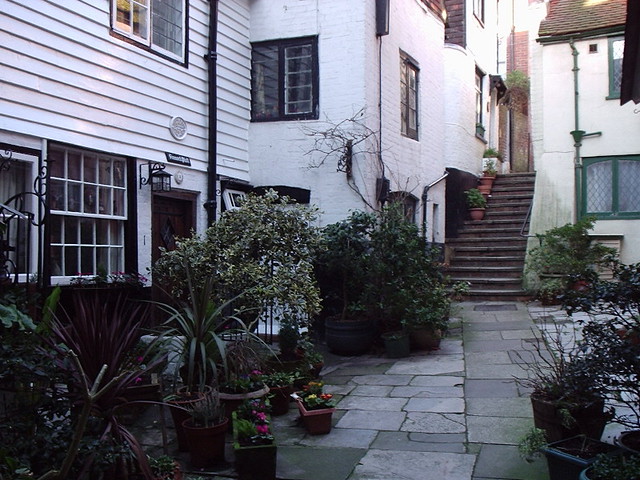 24) Rock-A-Nore is the road at the eastern end of town which leads to the very end of town. It has a mix of old and new that blend seamlessly and fit each other. Towards the end of the 19th century it is said that families lived in caves dug into the rocks along this road. 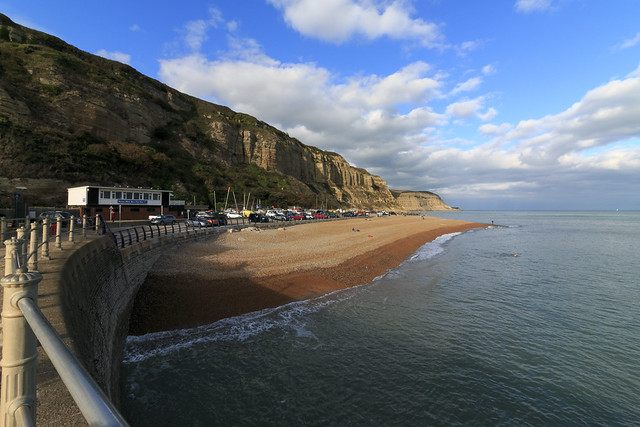 25) It’s easy to miss a small footnote giving clues to times long past. This manhole cover on the seafront, embossed with the legend “Arthur A. Hart, Ironmonger, Hastings.” Mr Hart apparently had three ironmongery shops in town - in Mount Pleasant Road, High Street and Station Road. 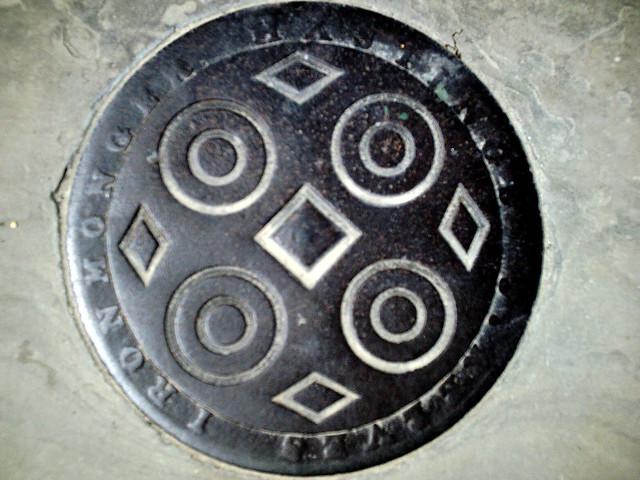 26) One of the joys of a town built on hills is views like this, looking out over the rooftops of Milward Road and its classic red-brick terraces. 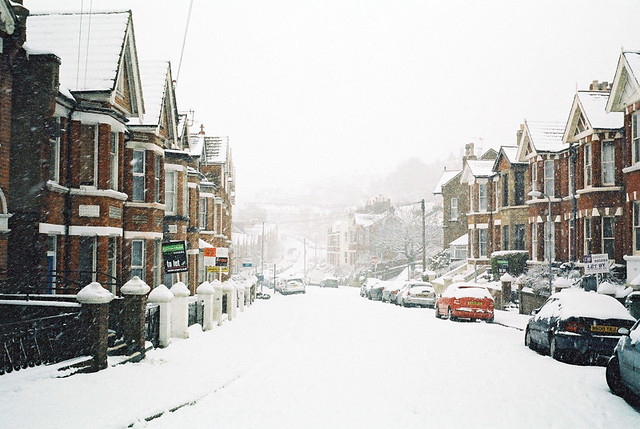 27) Lauren Eva, owner of The Cake Room in Robertson Road: “What’s great about Hastings is the people. In the summer it’s so relaxing to go down to the sea and watch the sun go down. There is an artistic, creative atmosphere.

“It’s very community-based; there are lots of artists and they all help each other on so many projects that, even here at the shop, we’ve done a lot of projects with local artists. It’s wonderful to have a nice, generous, creative community.

“It’s pretty easy to go to London or Brighton, whether by train or car, although I don’t actually go to London much, because Hastings is so brilliant.”

28) Susan Sims, singer, aka Sister Suzie: “I came here six years ago from the north-east. I’m a singer and I came down here with a piano player and we met up with a drummer from Pevensey Bay. I played a couple of gigs and I just couldn’t believe it.

“I’ve been addicted to New Orleans for ten years now and this place is the closest to New Orleans that I’ve ever seen. We have our own Mardi Gras. People get dressed up for any reason at any time. It feels like we have festivals every two weeks.

“So, I went home to the north, sold everything I had and came back on the Mega Bus in the middle of December. I went to Uni here, I’ve had a band here, I love it. I’ve played Glastonbury, New York and Nashville and none of it would have happened if I hadn’t moved. There are musicians everywhere here.”

11 of the best walks at National Trust sites in Sussex

5 things to do in Sussex this week: Top walks on the Sussex Downs

5 of the best January walks in Sussex